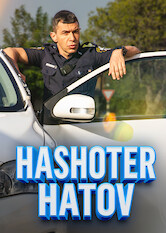 An honest -- though overzealous -- police officer strives to do good work while dealing with his bickering parents and incompetent coworkers.