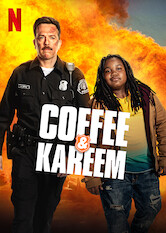 An inept Detroit cop must team up with his girlfriend's foul-mouthed young son when their first crack at bonding time uncovers a criminal conspiracy.