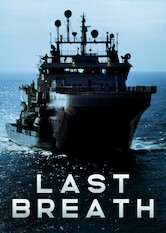 A commercial diver becomes trapped on the ocean floor with dwindling oxygen and little hope of a timely rescue, so he tries to save himself.