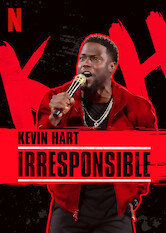 As a father of three on his second marriage, Kevin Hart proves that being him is indeed a tall order in a fresh special inspired by his own mistakes.