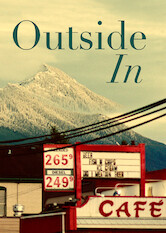 Pick a random title Outside In

After serving time for a crime he didn’t commit, a 38-year-old man forms a complicated, life-altering bond with the woman who advocated for his early release.