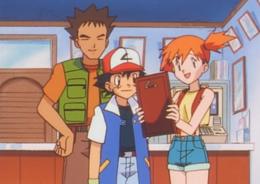 Ash and his friends meet the warden of the Safari Zone. While being briefed on the safari rules at his office, they spot an intriguing photograph.