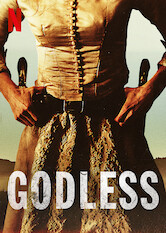 A ruthless outlaw terrorizes the West in search of a former member of his gang, who’s found a new life in a quiet town populated only by women.