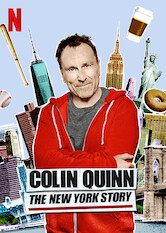 The 'SNL' veteran performs his off-Broadway show about the history of New York and the people who shape its personality. Directed by Jerry Seinfeld.