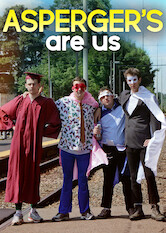 Pick a random title Asperger's Are Us

A comedy troupe of four friends on the autism spectrum prepares for a final show before its members go their separate ways.