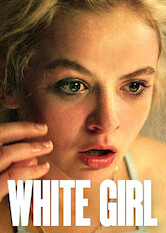 A college girl romping through New York City in search of cocaine and other highs finds something real to grasp, only to see it potentially slip away.