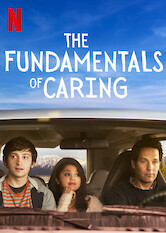 Pick a random title The Fundamentals of Caring

In this inspirational buddy comedy, a young shut-in and his caregiver take a road trip in search of landmarks, but end up finding hope and friendship.