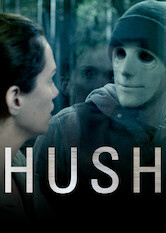 A deaf writer who retreated into the woods to live a solitary life must fight for her life in silence when a masked killer appears in her window.