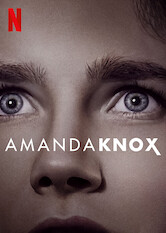 She was twice convicted and acquitted of murder. Amanda Knox and the people closest to her case speak out in this illuminating documentary.