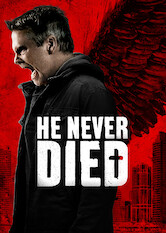 A reclusive immortal who needs human flesh but tries to stay clean finds himself cast back into society by a gang of thugs and his estranged daughter.