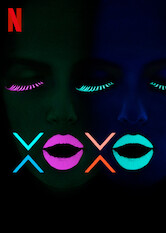 The lives of a budding DJ, his loyal pal, a hopeless romantic, a jaded has-been and a troubled couple intersect at an electronic dance music festival.