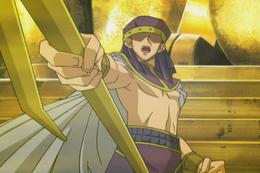 Pick a random title Yu-Gi-Oh! / Season 2 / The Past is Present

The origin of Duel Monsters is revealed! Using her magic necklace, Ishizu shows Kaiba how the ancient game was played millenniums ago.