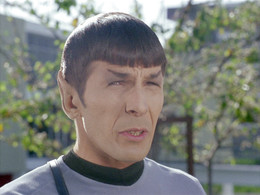 On another planet, Kirk's brother is killed by amoeba like aliens that also infect Spock. Bones tries to cure Spock with light, but causes blindness.