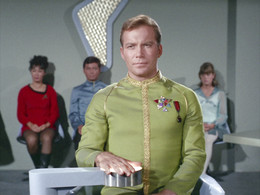 After an officer is killed in a freak accident, computer records indicate Kirk is to blame. Evidence at a court-martial reveal that Kirk was framed.