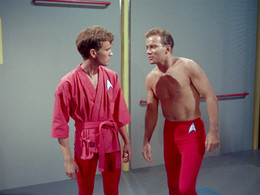 Powerful teenage psychic Charlie beams aboard. Although wanting to be liked, he attacks others until the secret of his powers are revealed to Kirk.