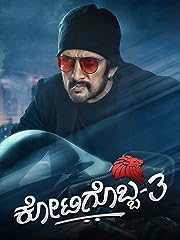 Kotigobba-3 is a sequel to the movie Kotigobba-2 starring Kichcha Sudeep, Madonna Sebastian, Shraddha Das, Aftab Shivadasani, P. Ravishankar, Nawab Shah, Rangayana Raghu, Tabla Nani and other actors. Kotigobba -2 is a blockbuster movie produced by Soorappa Babu under the banner Rambabu productions. Itʼs a Action-Con entertainer which had Sudeep portraying the lead character “SATYA” who is a con-man who cheats all the bigwigs and donates the money to the poor. “SATYA” is chased by an ACP named KISHORE played by P.Ravishankar. At the end of the movie SATYA escapes from the Police framing ACP KISHORE as a culprit and he goes to jail. While going to jail ACP KISHORE warns SATYA that he will be back to take revenge on him. “KOTIGOBBA-3” is a continuation from that point where SATYA now does things in a bigger canvas and he becomes a International Conman. He cons bigger stuff and pulls off bigger robberies. He becomes a target for the INTERPOL. SATYA also targets International Business man DEVENDRA and robs all his money, collections and business dealings. The chase canvas becomes International. SATYA plays cat and mouse game with INTERPOL and the Villain DEVENDRA. During this ACP KISHORE who is in jail comes to help both the INTERPOL and DEVENDRA to nab SATYA. Will ACP KISHORE succeed in taking revenge on SATYA? Will SATYA again manage to escape and frame ACP KISHORE as a culprit? Will INTERPOL catch the con-man SATYA? Will the Villain DEVENDRA find out who is this SATYA and why he has looted him?... the answers to all this forms the screenplay of KOTIGOBBA-3 which is racy action entertainer with array of characters coming in to entertain the audience with full dose of comedy, twists and turns. KOTIGOBBA-3 is a full fledged commercial action entertainer in an INTERNATIONAL canvas.