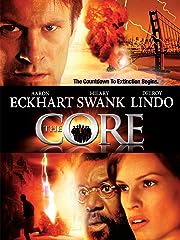 Academy Award® winner Hilary Swank leads an all-star cast in this electrifying journey that puts you in the middle of the most spectacular film adventure. Geophysicist Dr. Josh Keyes (Aaron Eckhart) has made a terrifying discovery: the Earth’s inner core has stopped rotating. Now the planet’s electromagnetic field is deteriorating and within months, Earth will be destroyed. One hope exists: to send Keyes and an elite team of scientists in a subterranean vessel to the center of the Earth. As mankind’s fate hangs in the balance, the scientists and the ship’s crew must do the unthinkable – detonate a nuclear device to reactivate the Earth’s core. Co-starring Delroy Lindo, Emmy® Award winner Stanley Tucci and Academy Award® nominee Alfre Woodward.