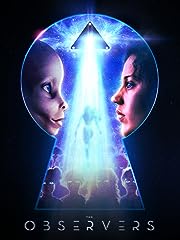 From controversial and visionary director Roger R. Richards, “The Observers” is an in-depth exploration, into the at times horrifying, yet equally fascinating abyss of modern day UFOlogy. Richards brings together top UFO researchers, whistleblowers, witnesses, abductee's and experiencers, in his 5th feature documentary dedicated to unpacking the complex nature of our collective reality. Filmed during the release of the much anticipated 2021 UAP (unidentifiable Ariel phenomenon) report, The Observers is a comprehensive and timely conversation that plumbs the depths of the UFO phenomenon and asks the hard questions at the heart of this global enigma. The Observers showcases an impressive cast of credible voices of influence that includes Luis Elizondo, Linda M. Howe, Richard Dolan, William Henry, Whitley Strieber, Jesse Ventura, John Greenewald Jr. and Jimmy Church of Fade to Black Radio . If you have ever questioned the possibility of time travel, extraterrestrial life, advanced top-secret technology, or alternate dimensions, “The Observers” is a nonstop, must see, mind bender. Awaken to the possibilities of an unimaginable reality, where UFO Disclosure triggers a quantum leap in human evolution.