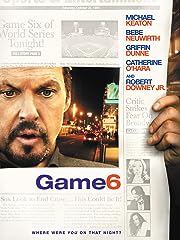 A respected playwright suffers through a mid-life crisis as his beloved Boston Red Sox are simultaneously trounced by the New York Mets in the sixth game of the World Series in this comedy-drama starring Michael Keaton. As he suffers from the increasingly bad sports reports, writer Nicky Rogan sweats over a potentially bad review of his new work, his pending divorce, and the ill health of both his leading man and his father. Bebe Neuwirth, Catherine O'Hara and Griffin Dunne costar in the screenwriting debut of novelist Don DeLillo.