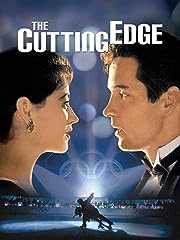 He (D.B. Sweeney) is a hockey player bound for stardom who has to give up the game because of an eye injury. She (Moira Kelly) is a rich, ambitious figure-skating champion who casts off inadequate skating partners like confetti. He thinks figure skating is for sissies. And she thinks he is a working-class jock dork. But he can really skate, and that still-very-empty gold-medal case in her trophy room looms large. So the rich girl and the jock from 'the other side of the tracks' give it a try. A few clumsy starts, and Sweeney begins to master the new kind of skates, the intricate partnering, the choreography. And, of course, even as they growl at one another, complain and fight, they are falling in love. Will love triumph? Will they win an Olympic gold medal? Do lions roar?