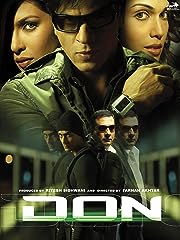 Relive this cult of an action movie from 1978 about an uncatchable mafia don in a new avatar. Starring Shah Rukh Khan in a double role as Don/Vijay. In a chase to hunt the underworld gangster, Singhania, the Deputy Commissioner of Police, D'Silva (Boman Irani), tracks down a look alike of Singhania's best accomplice Don. D'Silva convinces Don's look alike Vijay, a commoner in Mumbai to masquerade as Don in return for a favour. When Don dies in a police raid, Vijay is sent in the gang to pose as Don in order to expose their vile rackets and help the police. Soon Vijay locates a disc pertaining vital information regarding Singhania's rackets. There he meets Roma (posing as Don's private associate) who is an enemy of Don and wants to kill him. The gang is then attacked by another inspector, Vishal Malik (Om Puri) and D'Silva is unfortunately shot dead in the raid. With the only person who knew his identity sleeping with the fishes, Vijay finds himself in quite the predicament.