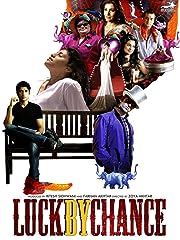 Revolving around the themes of 'love and stardom', this movie sheds light on the lives of Sona (Konkona Sen Sharma), a struggling actress waiting for a break in the film industry and Vikram ( Farhan Akhtar), a fresh face in Bollywood. The duo meet while struggling to establish themselves in the industry resulting in a relationship. With time, luck shines bright on Vikram as he gets a break in a movie. However, Vikram falls in love with his co-star, Nikki, an established actress, who uses him for her personal benefit. The relationship between Vikram and Nikki becomes the talk of the town and upsets both Nikki's mother Neena and Sona. Having being cheated upon, Sona accepts her fate and decides to take up whatever comes her way and finds success in television. Vikram, on the other extreme, meets Shah Rukh Khan during the premier of his debut movie and is advised to respect those who have always stood by him and not be carried away by the glitz and glamour of tinsel town. Realising his mistake, Vikram seeks to set things right with Sona. Will Sona accept him back into her life?