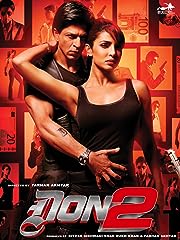 Don 2, starring Shah Rukh Khan, is a sequel to a 2006's Indian action thriller 'Don'. Living in Thailand for the past five years and having conquered the Asian underworld, international gangster Don now has bigger plans. He has been plotting to destroy all his enemies with a master plan that will see him become the sole ruler of the European underworld. This time both the Asian and European defence unit is out to capture him, not to mention the existing bosses of the European underworld. But Don never liked it easy and to everyone's wonder, he surrenders to an Interpol officer Roma (Priyanka Chopra) in Malaysia . In jail, Don meets his old rival Vardhaan (Boman Irani) and it soon comes to light why Don surrendered. A set of currency plates in Germany seem to be what the Don is ultimately after, but with him in a jail in Malaysia, the plates are but a distant dream.

Malice in Wonderland
Carrie
The Signal
The Magic Of Belle Isle
Dumbstruck
Bit
Baywatch, Season 1
The Last Ghost Hunters
Bit
It Came From Below
A Dog's Tale $
Exit Humanity
The Deaths of Ian Stone
Dead & Buried
The Dark
Climate Of The Hunter
The Boat
Bit
Bit
Dismissed
❮ ❯