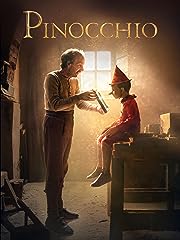 Academy Award® winner Roberto Benigni stars as Geppetto in the enchantingly reimagined Pinocchio. When a magical piece of wood falls into his hands, Geppetto carves from it his greatest creation, Pinocchio, a puppet wondrously bestowed with life. Pinocchio's dreams of becoming a real boy are complicated by his misadventures among a host of otherworldly creatures - a fox- and-cat bandit duo, an asthmatic dogfish, a talking cricket, and others - until he meets a kind blue-haired fairy, whose only wish is to make his dreams come true.