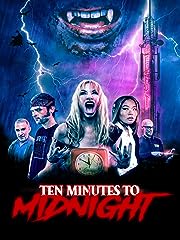 In TEN MINUTES TO MIDNIGHT, Caroline Williams returns to the DJ booth for the first time since her star-making turn as Stretch in 1986's THE TEXAS CHAINSAW MASSACRE 2. A character-driven night terror, TEN MINUTES TO MIDNIGHT begins when veteran punk rock disc jockey Amy Marlowe (Williams) is bitten by a rabid bat on the eve of her final graveyard shift broadcast. When a raging storm traps Amy, her mysterious replacement (Nicole Kang, "Batwoman"), and the uneasy staff inside their small-town radio station, reality begins to fracture as they move further and further into the graveyard shift. The film draws inspiration from classic horror tales brought to life by Stephen King, "The Twilight Zone", and other forgotten late night horror anthology programs. Also woven throughout the mayhem is a melancholic meditation on the perceived disposability of women over a certain age and a reflection on metaphysical mortality: the death of who we were and who we thought we'd be.