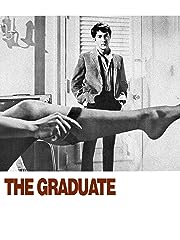 Nominated for 7 Academy Awards and Winner for Best Directing, this groundbreaking film classic launched the career of two-time Oscar Winner Dustin Hoffman. During a party given by his parents to celebrate his graduation, Benjamin Braddock (Hoffman) is seduced by the sexy Mrs. Robinson (Anne Bancroft), the wife of his father’s business partner and closes friends. Although Benjamin is shy and inexperienced, they have an affair. But then, when Benjamin falls in love with Mrs. Robinson's daughter, Elaine (Katharine Ross), a jealous and angry Mrs. Robinson does everything in her power to keep the young couple apart.