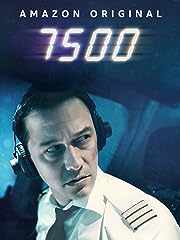 In the cockpit of a commercial airliner about to depart Berlin for Paris, the plane’s soft-spoken young American co-pilot, Tobias (Joseph Gordon-Levitt), runs through the preflight checklist with the German pilot, Michael (Carlo Kitzlinger). Gökce (Aylin Tezel), Tobias’ flight-attendant girlfriend, comes in to chat briefly with him about preschools for their daughter before preparing the passengers for takeoff. But what starts out as just another day on the job quickly turns into a life-or-death struggle when terrorists determined to take control of the plane force their way into the cockpit. Armed with knives fashioned from broken glass, they stab Michael and slash Tobias’ arm. Tobias barely manages to subdue one of the hijackers and push another back into the cabin, locking the door behind him. With Michael barely conscious, a terrified Tobias contacts ground control to arrange an emergency landing in Hanover. Infuriated, the terrorists in the cabin threaten to kill a passenger unless Tobias lets them back into the cockpit, which — following airline protocol — he refuses to do. But when the hijackers make good on their promise and then take a crewmember hostage, this ordinary man’s resolve is put to an excruciating test. As he makes a desperate effort to save the lives of the remaining passengers, Tobias forges a surprising connection with a panicked young hijacker who he realizes is as much a victim in the deadly situation as he is. A tense and thought-provoking thriller from Oscar-nominated director Patrick Vollrath, 7500 stars Joseph Gordon-Levitt, Omid Memar, Aylin Tezel, Carlo Kitzlinger, Murathan Muslu and Paul Wollin. The film is written by Vollrath and Senad Halilbasic. Award-winning producers are Jonas Katzenstein and Maximilian Leo. Executive producers are Ellen Goldsmith-Vein and Lindsay Williams.