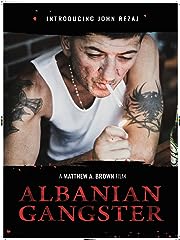 At 47, LEON (played fearlessly by John Rezaj) was once the righthand muscle of feared Albanian mafia boss, Murat Dreshaj.  Once a legend, respected, feared, with the Bronx and NYC at his feet, a man who took six bullets and survived with the scars to prove it, a man now—after 18 years in prison—today, a legend only in his own mind. Living in his mother's basement, a rabid dog harboring untold grievances, desperate for the life and dreams he knew were his, now all pinned on LISA (Ashley C.