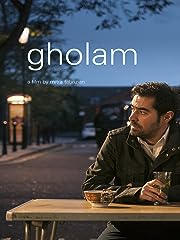 Gholam is an Iranian immigrant living in London, where he drives a cab and moonlights as a mechanic. An enigmatic figure, he is full of contradictions. He agrees to his mother's plans for his return, but has no intention of actually going back. He eats at his uncle's café every day, while fully aware of being betrayed by him. He lives a quiet life and generally tries to keep to himself. Nevertheless, one day he is approached by two mysterious Iranian men who remember him as a heroic soldier in the Iran-Iraq War and are keen to enlist him in their mission. Meanwhile, Gholam finds a mission of his own, through his friendship with an elderly woman in the neighborhood. Between these conflicts of the past and present, the future is uncertain.

The Deposit
The Hunt for Red October
Romance $
Reds (4K UHD) $
The Care and Handling of Roses $
Like Rabid Dogs $
End of Days
The Deposit
The Hard Corps
Blood Suckers from Outer Space $
Here After
The Usual Suspects
The Thin Red Line
Pineapple Express (Unrated)
All Is Lost
The Observers $
No Time to Cry $
Lupin the 3rd - Prison of the Past (Original Japanese Audio) $
Legendary 1979 No Nukes Concerts - Springsteen E Street Band, The $
The Brain From Planet Arous $
❮ ❯