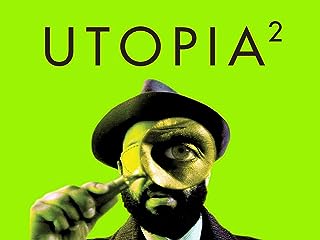 Utopia is a legend. A cult graphic novel rumoured to have predicted the worst disasters of the late twentieth century. Dismissed as the fevered imaginings of a madman by most, and idolised by a handful, only one thing seems certain about Utopia: come into contact with it and you wonâ€™t be safe for long. When a small group of outsiders find themselves in possession of the manuscript of Utopia, they find themselves at the centre of a nightmarish conspiracy turned real. Targeted by a shadowy organisation known only as The Network, they are left with one option if they want to survive: they have to run. Never able to return home, their lives are transformed. They cannot use credit cards, public transport, mobile phones, email or texts. They cannot contact their families or go to the police. They cannot go anywhere CCTV might pick them up. They live in constant fear of discovery and they have no idea why they are being pursued - all they know is that the men who want to kill them think nothing of mass murder. These people are not heroes. Ianâ€™s an IT consultant who still lives with his mum and heâ€™s way into his mid-twenties. Beckyâ€™s a student who might only have eighteen months to live. Wilsonâ€™s a survivalist oddball. And Grantâ€™s an eleven year old boy. Nonetheless, they are the only people now standing in the way of The Networkâ€™s plan. The Network is everywhere: in government, in business, in charge. A secret organisation constrained neither by borders nor common morality. Nobody knows what their plan is, just that they will stop at nothing to find the original manuscript of Utopia. UTOPIA asks what if the conspiracy nuts are right? What if people are trying to control our lives, doctor our food, experiment upon us, kill us? Fast, terrifying, funny and brutal, it is the new drama/conspiracy thriller from the pen of the acclaimed stage and television writer Dennis Kelly.