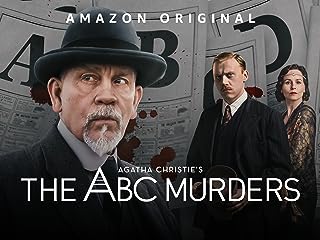 The year is 1933 and a killer stalks Britain, known only as A.B.C. They strike in a methodical pattern and leave a copy of the ABC railway guide at the scene of each of murder. As Hercule Poirot attempts to investigate he is thwarted on every front; by a police force that no longer trusts him, a public that no longer adores him, and an enemy determined to outsmart him. If Hercule is to match his most cunning nemesis everything about him will be called into question; his authority, his integrity, his past, his identity. Hercule has aged and the world has changed quickly around him. Even worse, he has been swept aside by the new brooms in the police, specifically the hot-headed INSPECTOR CROME. Eventually, Scotland Yard take interest in Hercule: how does Hercule know so much about these murders? And what is he hiding about his past? The A.B.C. killer travels the length and breadth of Britain to taunt Poirot. As Poirot tracks the killer across a riven, tense England, the case peels back the layers of the persona he’s created to survive in a foreign land, surrounded by strangers where the only person who seems to truly understand him, is the deranged, uncontrolled killer.