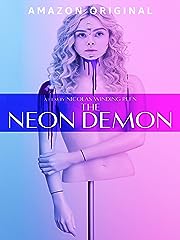 JESSE, 17-year-old beauty from Georgia, moved to Los Angeles to pursue a modeling career. That, so far, has been disenchanting at best. Things seem to turn around for her when she is befriended by RUBY, a 22-year-old make-up artist, and GIG and SARAH, both beautiful but "aging" models. The three women have one thing in common; a fixation for youth and beauty - Jesse's beauty in particular. As Jesse's career starts to gain early momentum, unusual events keep her feeling uneasy and it becomes clear that Jesse's relationship with the women is not what she thought it was. Pretending to protect her from a home intruder, Ruby puts Jesse in an impossible situation. Cornered, Jesse meets her demise at the mouths of the very women who befriended her. Gigi, Sarah and Ruby's fixation with the belief that consuming a young and beautiful virgin will restore their own vitality now leaves them in precarious position when the result is very different from the expectation. Driven to insanity, each women must come to terms with what they have done... and it doesn't end well for any of them.

Bell Bottom
Talk To Her
Vacuuming Completely Nude in Paradise
The Gambler (2014)
Scouts Guide to the Zombie Apocalypse
Blame
Lonely Hearts
The Song of Lunch
Lonely Hearts
Blame
All About My Mother
Prozac Nation
The Devil's Backbone
The Student Prince
The Song of Lunch
Scouts Guide to the Zombie Apocalypse
Mother And Child
Rammstein: in Amerika - Live from Madison Square Garden
Marihuana
I Like It Like That
❮ ❯