When the Clouds Roll By and Burglars Bold 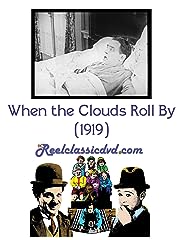 WHEN THE CLOUDS ROLL BY starring Douglas Fairbanks, Kathleen Clifford, Herbert Grimwood, Frank Campeau and Ralph Lewis. Directed by Victor Fleming. Painfully superstitious Daniel Boone Brown (Doug) is, without his knowledge, being used as a human guinea pig by a crazy doctor who lives in the same New York apartment building. The doctor uses spies and confederates to drive him to the brink of madness. His miserable life improves upon meeting Lucette, who is just as superstitious as he is. When Doug is falsely implicated in a crooked business deal, Lucette leaves him for another man and Doug follows in desperate pursuit. Packed with lots of comedy, stunts and action, this is one of the very best Fairbanks features. Climaxed by an incredible flood scene on a giant scale, this is pure entertainment from beginning to end! BURGLARS BOLD starring Eddie Boland, Ethel Broadhurst and The Vanity Fair Girls. Directed by Nicholas T. Barrows and produced by Hal Roach. A burglar on the loose, stolen jewels, mistaken identity and a misfired practical joke are all factors that come into play in this delightful, rare short from the Hal Roach Studios. At stake is a jeweled garter with "a four carat sapphire and over a half pint of rubies". Original music scores composed and performed by Bernie Anderson!