The Forbidden City and Secrets of Hollywood 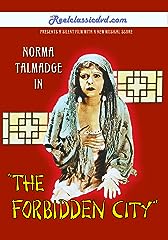 THE FORBIDDEN CITY (1918 - 61 minutes) Starring Norma Talmadge, Thomas Meighan, Michael Rayle, E. Alyn Warren, L. Rogers Lytton and Reid Hamilton. Directed by Sidney Franklin. Lovely Norma Talmadge plays a dual role in this romantic drama. In an effort to regain his good will, a Chinese mandarin promises the Emperor the hand of his daughter in marriage. The unfortunate mandarin, however, does not know that his daughter has been secretly married to an American and that she already carries his child. A film that will be considered more controversial today than when it was made, THE FORBIDDEN CITY addresses the subjects of race, mixed marriage and social injustice. Made directly from the best film elements available, this Reelclassicdvd.com release is of the very highest quality. Includes an original music score composed and performed by Ben Model of the Museum of Modern Art. SECRETS OF HOLLYWOOD (1933 - 30 minutes) Starring Mae Busch, Tom Herbert, Luana Walters and George Cowl. Directed by George M. Merrick. A sound film that features highlights from earlier silents. While at the studio, Mae and her Hollywood friends explore her collection of stills. They reminisce about movies from yesteryear as the stills come to life. A rare, quirky film that features scenes from THE BUSHER (1919), HAIRPINS (1920), THE ROOKIE'S RETURN (1920), THE SOUL OF THE BEAST (1923), THE MARRIAGE CHEAT (1924) and BARBARA FRIETCHIE (1924).