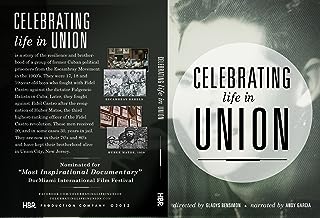 Celebrating Life in Union narrated by actor Andy Garcia, is a story of the resilience and brotherhood of a group of former Cuban political prisoners from the Escambray Movement in the 1960's. They were 17, 18 and 19 year old boys who fought with Fidel Castro against the dictator Fulgencio Batista in Cuba. Later, they fought against Fidel Castro after the resignation of Huber Matos, the third highest-ranking officer of the Fidel Castro revolution. These men received 20 and in some cases 30 years in jail. They are now in their 70's and 80's having kept their brotherhood alive in Union City, New Jersey. The documentary premiered this past August at the New York City International Film Festival. It has been nominated as the most inspirational documentary by Doc Miami International Film Festival.