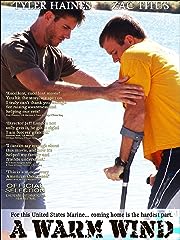 Buck, a United States Marine has returned from the Iraq war. With his physical disabilities, Post Traumatic Stress Disorder and no real family to care for him, he can't seem to fit into society. Buck's cousin David makes a giant leap and invites him to his home. Things get heated with family and friends who argue Buck is the government's problem. David must do what is right. Buck deals with the guilt over leaving his battle buddies in war, trying to find a balance in life back home. Producers had help getting the production made, including 4 Army/Marine technical advisors and script approval from Camp Pendleton Marine Base for technical accuracy. Film Festival Premieres: Cheyenne International Film Festival, 2011 Lake Havasu City/UltraStar Cinemas Premiere, 2011