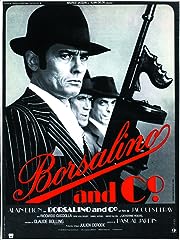 Marseille. Heaps of flowers and funeral wreaths... A Mafia funeral in 1934. While François Capella's casket is gradually lowered, Roch Siffredi, dressed in black, stands motionless holding his hat and swears to revenge his friend. "A man who no longer defends his colors is no longer a man." But life goes on and Roch is at the peak of his success, controlling the whole city with its houses of prostitution, gambling dens and even the Alcazar, a new vaudeville theatre which is all the rage with the people of Marseille. Roch Siffredi chooses the first favourable opportunity to dispose, in an offensive manner, of the killer responsible for his associate's death. This killer is employed by Giovanni Volpone, a newcomer in Marseille with German ideas and American methods and capital. The reaction is sudden and brutal. Like a hurricane, Volpone destroys Siffredi's empire in a single night. But the oath Siffredi made to revenge his friend is always on his mind.