Syfy's Being Human: Cast & Creators Live at the Paley Center 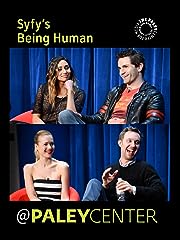 Syfy's reimagining of the popular British series follows three twentysomething Bostonians as they navigate the demands of contemporary urban life, which in their case is a bit harder due to certain existential complications: one's a ghost, one's a vampire, and one's a werewolf. The series has won praise for explicating the humanity of its characters, in addition to their preternatural qualities. This Paley Center for Media live event celebrates "Being Human," Syfy's drama series based on the British program of the same name about three twentysomething Boston roommates: a ghost, a vampire, and a werewolf. Nadira Hira (journalist, Fortune magazine) moderates the following panelists: executive producer Anna Fricke; and cast members Sam Witwer (Aidan Waite), Meaghan Rath (Sally Malik), Sam Huntington (Josh Levinson), and Kristen Hager (Nora Sergeant). The panelists touch on such topics as: how the cast dynamic has changed since the recent addition of Hager; the reasons for the fifteen-month storyline gap between seasons two and three; and the significance of the show's music. Questions from the audience then lead to a discussion of the following topics among others: the decision to break away from voiceover narrations; the differences between the British and American versions of the show; and challenging stunts for the actors.