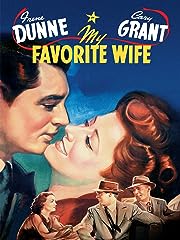 Cary Grant and Irene Dunne star in this classic romantic comedy about a man with one spouse too many--and the resulting legal and romantic dilemma--My Favorite Wife. Seven years ago, Nick Arden's (Grant) wife, Ellen (Dunne), left on a scientific expedition with Stephen Burkett (Randolph Scott) never to be seen again--until today! The problem is that after spending years searching for Ellen, Nick has just married Bianca (Gail Patrick). When, on the first night of his honeymoon, Nick sees Ellen, he realizes he still truly loves her. But Bianca stands by her claim as Nick's wife, and Nick wants to know exactly what Ellen was doing during the seven years shipwrecked on a tropical island with the handsome Stephen.