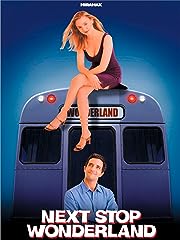 The critically acclaimed romantic comedy of the year, Next Stop Wonderland is a lighthearted story about a man and a woman who seem destined to be together...and the hilarious chain of accidents that seem determined to keep them apart! Dumped by her loser boyfriend (Philip Seymour Hoffman The Talented Mr. Ripley), Erin (Hope Davis Arlington Road) thinks that her love life has hit rock bottom. In reality, the all-time low comes when her overbearing mother (Holland Taylor - TV's The Practice) places an embarrassing ad for her in the "personals" section of a local newspaper! Erin's disgust turns to curiousity, however, when the calls start pouring in - all 64 of them! As she searches for the right guy in a hilarious series of disastrous dates, a lonely ex-plumber named Alan (Alan Gelfant) clumsily searches for his dream job...all the while narrowly missing one chance meeting with Erin after another! Filled with delightfully unexpected surprises, you're sure to love every minute of this smart and funny adventure into the wildly unpredictable world of dating!