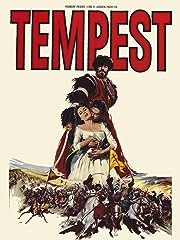 This drama of 18th-century Russia and the reign of Catherine the Great tells of the romance of a young officer (Geoffrey Horne) and his commander's daughter (Silvana Mangano). The country is torn by revolt as Pugachev (Van Heflin) leads his Cossack rebels against the forces of the Czarina (Viveca Lindfors). As battles rage, the young lovers are caught in a web of deceit and treason, only to be spared at the end through the generosity of Pugachev, who goes to the gallows.