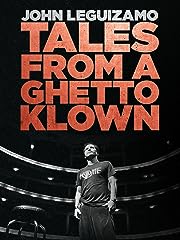 John Leguizamo: Tales from a Ghetto Klown. When it comes to sharing your life's intimate details, most people prefer to speak to their friends, family, or even a therapist. But when John Leguizamo bares his soul, he chooses one of the most public venues of all--the Broadway stage. For the fifth time in his career, the renowned actor, playwright, and all-around funnyman has chosen to share tales from his life--chancletas and all--in his new one-man show Ghetto Klown. This one-hour documentary features an unprecedented view of John Leguizamo the artist, writer, and bi-cultural phenomenon, as he struggles to mount his latest one-man show on Broadway and beyond. Directed by Ben DeJesus, TALES FROM A GHETTO KLOWN gives an intimate look into John's passionate writing and rehearsal process, while profiling his Colombian and New York City roots and unique rise to success. The film also captures John's cultural re-awakening as he follows up his award-winning turn on Broadway with his riskiest move yet--a Spanish-language tour of his latest opus in Colombia.