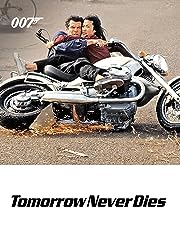 Pierce Brosnan leaps into action as Agent 007 in this spectacular thrill ride of death-defying stunts and amazing high-tech gadgets. In the most electrifying Bond film yet, the unstoppable action hero must prevent a tremendous disaster ripped from tomorrow's headlines. Someone is pitting the world's superpowers against each other - and only James Bond can stop it. When a British warship is mysteriously destroyed in Chinese waters, the world teeters on the brink of WWIII - until 007 zeros in on the true criminal mastermind. Bond's do-or-die mission takes him to Elliot Carver (Jonathan Pryce), a powerful industrialist who manipulates world events as easily as he changes headlines from his global media empire. After soliciting help from Carver's sexy wife, Paris (Teri Hatcher), Bond joins forces with a stunning yet lethal Chinese agent, Wai Lin (Michelle Yeoh), in a series of explosive chases, brutal confrontations and breathtaking escapes as they race to stop the presses on Carver's next planned news story: global pandemonium! With powerhouse action sequences, including a wild motorcycle pursuit through (and over!) Saigon, Tomorrow Never Dies is a thrilling action-adventure that roars from start to finish with the throttle wide open (Gene Shalit, NBC-TV)!