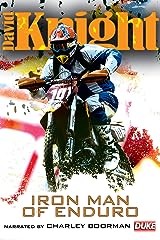 This is the story of a true sporting great, tracing his life and career from the early days to global domination. David Knight's childhood dreams of becoming a world-beater have been achieved in dramatic style. World Enduro Champion twice, British Enduro Champion six times and numerous high-profile wins in AMA Enduro Cross, Erzberg, Last Man Standing and more - and all before he turned 30! 'Knighter' has earned legions of fans around the world with his determined and skilful riding style, but behind the star is a grounded family man and proud native of the Isle of Man. This film, narrated by Long Way Down star Charley Boorman, explores David's roots, his early success and the road to championship glory. It is packed with interviews with David and his family, plus archive footage and pictures from his personal photo album. There is also action footage of the Manxman on World Championship events, and unforgettable highlights from major events, including the Weston Beach Race, Erzberg and Last Man Standing.