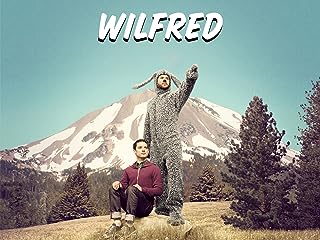 Wilfred is a half-hour, live-action comedy about "Ryan," a young man struggling unsuccessfully to make his way in the world until he forms a unique friendship with "Wilfred," his neighbor's canine pet. Everyone else sees Wilfred as just a dog, but Ryan sees a crude and somewhat surly, yet irrepressibly brave and honest Australian bloke in a cheap dog suit. While leading him through a series of comedic and existential adventures, Wilfred the dog shows Ryan the man how to overcome his fears and joyfully embrace the unpredictability and insanity of the world around him. <NL> <NL>Wilfred is based on the critically acclaimed Australian series of the same title and was adapted for FX by David Zuckerman (Family Guy). Elijah Wood stars as "Ryan" and Jason Gann, who co-created and starred in the Australian series, plays the title character "Wilfred." Series regulars also include Fiona Gubelmann as "Jenna," Ryan's beautiful neighbor and Wilfred's owner, and Dorian Brown as "Kristen," Ryan's uptight sister.