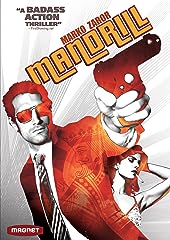 Antonio is made an orphan when his parents are brutally murdered. As years of vengeance build up, he transforms into the relentless bounty hunter code-named “Mandrill.” His sole mark is to find his parents’ murderer and avenge their deaths. While on the job to capture a powerful Mafioso casino owner, Mandrill falls for his target’s daughter, Dominique. As he becomes closer to her, he makes a discovery that positions Dominique as an obstacle to his ultimate revenge.